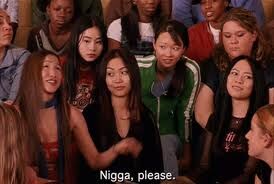 They are a clique at North Shore High school and are seen to be one of the more popular cliques. They can be seen when Cady is trying to find a lunch table on her first day and one of the girls rudely puts her bag on the chair so Cady cant sit down. Members of this clique include Gretchen Wieners (Who joins at the end of the film) , Trang Pak and Sun Jin Dinh.

Trang Pak can be seen making out with coach Carr while Damian tries to lure Aaron into the projection room.

Trang Pak and Sun Jin Dih can be seen fighting and hitting eachother over the coach who they both had affairs with Coach carr which was illegal as they were under age.

When they are seen sitting in the hall they argue with one another in Vietnamese.

At the end of the film Gretchen is seen being a follower to the leader of the Cool asians clique.

Retrieved from "https://themeangirls.fandom.com/wiki/Cool_Asians?oldid=4043"
Community content is available under CC-BY-SA unless otherwise noted.